A Short History Of The Supermarket

Groceries have played an important role in the development of all civilisations. Already in the the world’s earliest of settlements, people were trading food. Today, our national and global culture keeps evolving. This can be observed in grocery shopping developments and innovations:

18??-1915: over-the-counter grocery shops were common. Women used to go to the shop with the grocery list, where the clerk would take the products from the shelves, while giving product advice.

1910, New York City: the appearance of th rolling stoRe [source: Time]: supermarkets on trucks, allowing people in the villages to do grocery shopping, without having to go to farms or distant grocery shops. Rolling store entrepreneurs took advantage of the fact that trucks had fewer overhead costs than fixed locations. 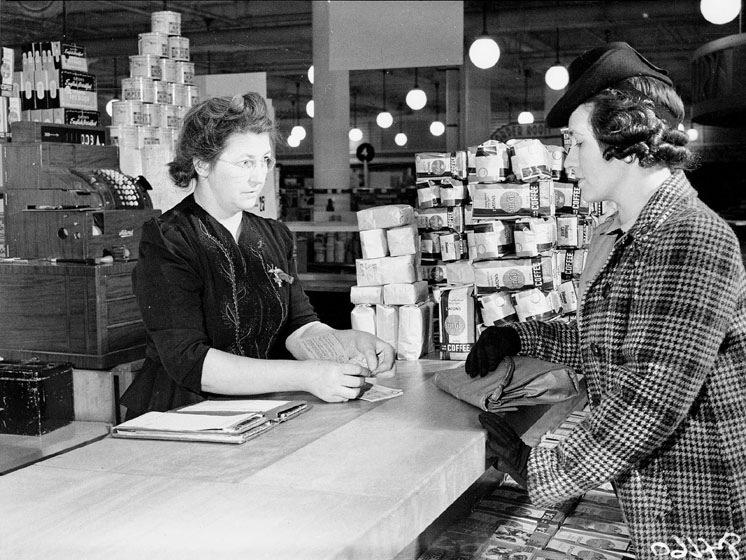 1916, Memphis, Tennessee, USA: Piggly Wiggly [source: Wikipedia] was founded as the first self-service grocery store. From this time forward on, customers were allowed to pick up items by themselves. These shops were not yet supermarkets, but already introduced three fundamental designs: 1) the entrance turnstile, obliging customers to enter the shop from one side and exit from the other; 2) the (metal) basket, to carry the products directly picked from the shelves; 3) the price tag, which allowed customers, for the first time ever, to know the price of the goods before buying them.

1927, Dallas, Texas, USA: the first convenience store was born out of Joe C. Thompson‘s egg. As a manager of a Southland Ice Company ice plant, he started selling milk, bread and eggs (“convenience items”) from an ice dock on Sundays and evenings, when the grocery stores were closed. These convenience stores were soon bundled together as a franchise named Tote’m Stores [source: Wikipedia ‘7-Eleven’]. (In 1945 the company became 7-Eleven, explained further down.) The outbreak of the Great Depression in 1929 made cash money scarce,  therefore convenience stores perfectly met the needs of the people concerned with saving money.

1930, August 4th, Long Island, NY, USA: King Kullen [source: Wikipedia] was the first supermarket (superstore). This new type of grocery store gained a lot of success thanks to the fact that consumers now had cars to reach the supermarket and do an abundant amount of grocery shopping, which could then be stored for long, thanks to refrigerators becoming more mainstream. (Though it must be noted that the use of refrigerators spread at different paces around the world. In the Netherlands, for example,  it took until roughly 1970 for the majority of household to own one [Source: Techniek in Nederland]).

1931-1933, Portland, Oregon, USA: Fred Meyer developed the first hypermarket: a combination of a supermarket, pharmacy and clothing shop (Walmart followed much later, in 1988, with their first “Supercenter” in Washington, Missouri, USA).

1937, June 4th,  Oklahoma, USA: Sylvan Goldman [source: Wikipedia] invented the (double-decker) shopping cart [source: Wikipedia] revolutionising the supermarket’s shopping experience. But it would take over 10 more years [source: Wired] for the shopping cart to evolve into the model we know today; with  an in-built chair to carry children, and a flip-door allowing carts to be pushed into one another for space efficient parking.

Also in 1937: A Piggly Wiggly spin-off, called Keedoozle [source: Wikipedia] was created as a prototype for a semi-automated grocery shop. Customers were given a paper tape, in which they could punch holes to order products displayed behind glass windows. At the cashier operated check-out, the punched tape was used to A) mechanically calculate the total price and B) send the order to a manually operated supply room, from which the products were delivered via a conveyor belt. Keedoozle failed because the mechanisms weren’t efficient enough.

[Keedoozle customers in the late 1930s. The lady is looking at products on display behind glass. The gentleman is making an order by punching holes in his tape. source: Wikipedia – Keedoozle]

1945, USA: the Tote’m Stores convenience store franchise rebranded itself as 7-Eleven. [source: Wikipedia]. It kept on expanding and introduced for the first time the unprecedented opening times: 7AM (7:00) to 11PM (23:00).

1974, Troy, Ohio, USA: the invention of the barcode and its scanner were first introduced in a Marsh supermarket. These innovations revolutionized the supermarkets checkout procedure, making it fast, as well as allowing for easier inventory and supply management processes. At the same time it allowed to start tracking and recording consumers’ preferences.

1980, Austin, Texas, USA: Whole Foods [source: wholefoodsmarket.com] opened as a revolutionary supermarket – the first organic supermarket – born from the merging of three hippy grocery stores. It built on the idea of offering specially selected, high quality, fresh food. “Whole Foods, Whole People, Whole Planet” was the motto, which introduced a broad eco-friendly vision. Among their sustainability innovations we find total energy control systems, involving wind-generated electricity for the refrigerators, as well as having their lights regulated according to the sunlight, to save as much energy as possible. Also, they introduced a new and pro-active grocery shopping experience, by letting customers taste the food in-store.

1982, Canada: Bulk Barn [source: Wikipedia] was founded as a modern (re)introduction of bulk shopping, which involves the scooping of loose products from bins and sacks.

Early 2000s, USA: As a counter-movement to mainstream supermarkets and to the “throw-away” culture,  the Zero-Waste movement emerged, inspired by Bea Johnson [zerowastehome.com]. (Later adopted by many zero-wasters such as Lauren Singer [trashisfortossers.com] and Kathryn Kellogg [goingzerowaste.com].) This lifestyle builds on the concept of “The 5R’s: Refuse, Reduce, Reuse, Recycle, and Rot (and only in that order)” as mentioned in the Zero Waste Home website.

2007: With the spread of the zero-waste lifestyle, the concept of a packaging-free shop, as an alternative to the supermarket, started to develop. The zero-waste and bring-your-own-container ideas lifted off into popularity. In these shops, food (and non-food) could be tapped from dispensers, or scooped from bulk bins. Pioneers of this movement were Unpackaged  (London, UK, 2007) and the Italian franchises Negozio Leggero (2009) and Effecorta (2009).

Also in 2014: some (European) organic grocery shops evolved into bigger organic supermarkets, look at for example the EkoPlaza franchise (Netherlands, since 2010).

2016, September, Canada: Bulk Barn [source: bulkbarn.ca – Project Waste Free] started the “Reusable Container Program [source: citynews.ca] in a selection of stores, as a pilot  to investigate the safety of letting customers use their own containers.

2016, December: Amazon opened the first test version of Amazon Go, [source: Amazon.com] an automatic check-out supermarket. Customers check-in using a smartphone. When they take a product from a rack, or place it back into the rack, the smartphone’s wireless NFC connection registers this. When leaving the shop, the customer’s bill is paid automatically through electronic banking. A supermarket for the internet of things?

2016, February 24th, Canada: Bulk Barn expanded its “Reusable Container Program” [source: bulkbarn.ca – Project Waste Free] to all of its stores (200+) across the country.

2017, November: Carrefour Market and Hypermarket [source: Carrefour.com] started to allow customers to bring their own containers to package what they purchase at the ‘traditional food counters’ (butchery, fishmonger, delicatessen). Carrefour about the shopping process: “The person serving them alters the scales so as to exclude the weight of the container and affixes a price label in the same way as they would to classic plastic packaging.” At the same time, 16 Carrefour stores across Belgium started to test washable fabric bags for fruit and vegetables.

Bonus content: The design pillars of grocery shops and supermarkets

We believe that designing an (innovative) supermarket involves complex choices regarding the following elements:

With that in mind, we can roughly divide today’s (full-range) supermarkets into the following primary-focus-categories:

This site uses Akismet to reduce spam. Learn how your comment data is processed.